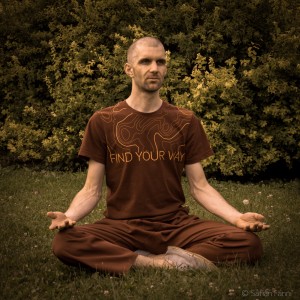 One of his core research and teaching topics is a fusion of tai chi and contact improvisation. He is fascinated about this field between internal martial arts and contact based dances, and working on how can these concepts, approaches and movement forms, qualities meet and support each other.

My life was always been dedicated to practicing on body and movement, exploring the wisdom of Body and embodiedness, through this way reach and cultivate something more subtle essence – personality, soul, spirit, self, mind or however you wish to call it.

I m deeply interested about how do these methods become a self discovering and revealing practice in a spiritual approach. How can we attain effortless Flow through practice on the Body and bring it to life, deliver it to other people, transform human relationships around us and lift up our environment.

Through years in this way I experienced and worked in many roles like performer artist, dancer, martial artist, monk, studio leader, masseur, teacher and therapist. But the final question is still being investigated: who am I?

Adam got his Dharma teacher BA @ Dharma Gate Buddhist University Budapest on Comparative religion and philosophy specialization and wrote a diploma thesis: Culture independent dharma – transmission and teaching based on bodyawareness, embodiedness, Body as a teacher.

2012 – starting organize and lead summer retreats with several methods that helps self discovery and well being within: yoga, chi kung, bodywork

2014 – born of an integral vision with many methods within, to get closer and reveal your Self: Getting Into Relations group sessions – a self discovering adventure, experiencing through the body and movements without words, understanding the wisdom of the body and integrating Body – Soul – Spirit realms

since 2017 – private therapies based on yoga, chi kung, bodywork, breathing